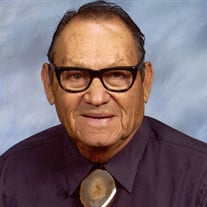 Cecil Cornelious Fillmore was born in Chickasaw Territory, Johnston, County, Fillmore, Oklahoma June 1928. He died peacefully at home in South Oklahoma City at age 92 with his wife (Joyce)of 70 years and children at his bedside. He was preceded in death by his parents, Marcum Fillmore (full blood Chickasaw) and Ella Fillmore, his brother Warren Fillmore, and Sheldon Rose his grandson. Cecil grew up in Fillmore, OK. He attended Fillmore grade school through the 8th grade. He then attended Chilocco Indian Trade School in Newkirk, OK from grades 9 to 12 where he trained in electronics. After school he married Joyce Rhea in 1950. He was then drafted into the Army to fight in the Korean War. He was honorably discharged in 1952 and continued with his career as an electrical technician. Cecil and his family traveled to Jones, OK, Detroit, MI, for further training in electronics to settle down in Midwest City to work for OG&E. He later started working for FAA in their electronic department. He and the family moved to OKC in 1967. He later retired from FAA in 1983. Cecil and family loved vacationing at Port Aransas, TX and camping in Arkansas. He and Joyce had many hobbies - ceramics, stained glass, swag lamps, he made jewelry, electronic projects, alternators and starters, played the guitar, raised rabbits, and worked on the family farm in Fillmore, OK. He was a very talented and busy man. Cecil attended Fillmore Baptist Church with his family as a boy where he accepted Jesus Christ as his Savior. He followed Christ his whole life. He was a loving Christian son, husband, father, and friend. He and his family attended Crutcho Baptist Church in Midwest City and Southwest Baptist Church after moving to OKC. All four of his children are saved and follow Christ. Cecil loved missions, he was generous to missions giving and missionaries. He passed out tracts to everyone everywhere. He prayed with a pastor down the street that the Lord told him to pray for. He read his Bible daily and advised his family and friends of God’s instructions frequently. He was eager to help anyone. He was an excellent role model for his 4 children, 14 grandchildren, 25 great-grandchildren, and 2 great-great grandchildren. Cecil was proud of his Chickasaw heritage. He was an active tribal member. He attended the OKC meetings and voted in elections. He had much of his healthcare needs met at the Ada Indian Hospital and clinics. Cecil is interred at Signature Funeral Home at 447 South Walker in OKC where his viewing will be from 5pm-7pm 6/4/21. Funeral services will be held at Southwest Baptist Church 1300 SW 54th street OKC at 10am on 6/5/21. The casket will be open prior to the service only. He will be cremated following the service as per his wishes.

Cecil Cornelious Fillmore was born in Chickasaw Territory, Johnston, County, Fillmore, Oklahoma June 1928. He died peacefully at home in South Oklahoma City at age 92 with his wife (Joyce)of 70 years and children at his bedside. He was preceded... View Obituary & Service Information

The family of Cecil Fillmore created this Life Tributes page to make it easy to share your memories.

Send flowers to the Fillmore family.