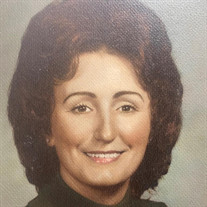 Not sure what to send?

Doris Ilene Thweatt passed away peacefully April 26, 2022, in Midwest City at Emerald Care Center where she had been for the past 4 years. She was born September 2, 1937, in Springdale, AR to Jake and Marie Shrum. Doris graduated from Carthage High School with 12 years of education and from then went on to having many occupations over the years. From being a mother, which was a full-time job, working at Otasco and becoming one of the top 100 salespeople in the company, to a bank loan officer, chicken egg farmer, lake resort owner, motel owner, and tractor trailer (semi) owner. Doris moved around quite a bit in her lifetime- living in Carthage- Joplin-Neosho MO, Pittsburg, KS, Boynton Beach, FL, Grove – Oklahoma City and then to Midwest City. She had 2 boys Terry Ray and Todd DeWayne Poulson. Doris loved to do arts and crafts that included painting pictures and odd items like saw blades, gourds and anything that she could, she was a lover of animals her favorites being dogs, cats’ pigs, and donkeys. She was a loving mother who provided a loving home for her two boys who were definitely Momma’s boys. Doris was always good at building up and then giving you the cold hard facts of life. One time when her son Todd was going to college at Oklahoma State University and he was having some personal problems one semester and had grades lower than normal, that were hurting him with his scholarships. He called her for advice and counseling as he always did. She told him “Failures and struggles build character in a person and to learn from this. However, if you get to much more character like this, they will kick you out of school.” A few words to sum up Doris’s life: Mother, Wife, Family. Loved all animals and worked hard to provide a home and instill good work ethics into her boys. Doris is survived by her husband Charles Edward Thweatt; her son Todd Poulson and wife Cynthia; Terry Poulson’s widow Brenda: Grandchildren: Misty Bittick, Tonya Linder, Jacob Poulson: Great Grandchildren: Carter, Darius and Amelia Bittick, Flora, Wyatt, Ila and Eli Linder, Aiden, Alvena, and Ariya Poulson. Doris is preceded in death by her father Jake Rodman Shrum; Mother Rosie Marie Shrum/Wilburn and son Terry Ray Poulson. A Life Party will be performed at her residence in Oklahoma City/Jones on June 11th, 2022 from 2-5PM. Contact Todd Poulson (405-834-4459) for details.

Doris Ilene Thweatt passed away peacefully April 26, 2022, in Midwest City at Emerald Care Center where she had been for the past 4 years. She was born September 2, 1937, in Springdale, AR to Jake and Marie Shrum. Doris graduated from Carthage... View Obituary & Service Information

The family of Doris Ilene Thweatt created this Life Tributes page to make it easy to share your memories.