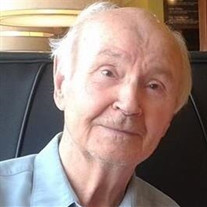 Edgar Tamm 93 years old Resident of Norman, Oklahoma. Edgar Tamm Oct.13, 1923 – June 17, 2017 Edgar Tamm was born in Tapa, Estonia to Juri and Elvine Tamm. He graduated from Tapa High School and Tallinn Technical Institute and worked as a financial planner for an Agricultural Land Survey Company in Tallinn for over 30 years. For 45 years he also served as a lay pastor in Oleviste Baptist Church, Tallinn. Edgar married Heli Metsala in 1950. They were married for 67 years and had five children. Edgar passed away at almost 94 this past Saturday. He used to walk everywhere, even late in life, to attend church or a nearby worship service. Edgar never learned to drive, never owned a car, never regretted not having learned to drive. Edgar travelled more roads than most people in several life times. He visited friends and family in Canada, Alaska, Georgia, Oklahoma, Oregon, Washington to name a few. Edgar’s primary passion and mission in life, outside the home, was pursuing ministry opportunities. Throughout his life he was surrounded by, “so great a cloud of witnesses”, of family members and friends in various Christian organizations. As a young boy he sustained a serious life threatening infection that left him significantly impaired in his left arm. The doctors were not able to prescribe a remedy and the family had no choice but to seek out a rural herbal specialist. The specialist, or old world medicine, was able to massage out the infection, save his arm and nurse Edgar back to health. With the advent of WWII the impairment prevented Edgar from being impressed into military service. Estonia was occupied by both German and Russian forces, several times. The impairment left a deep hole that could have been interpreted as a wound from the conflict. Several times as the battlefield changed hands, the village DR had to confirm that the wound was from an infection sustained as a young man. We believe that the infirmity actually opened many more doors than it closed. After the conflict the Soviet Union occupied Estonia and forcefully incorporated the free Baltic Republics; Estonia, Latvia, Lithuania into the Soviet Union. During this time Edgar completed his schooling and also had to get certified in Moscow. Edgar then married his sworn sweetheart, Heli. Together they had 6 children, with one dying in youth. Edgar was placed in a Department Director position at the Agricultural Land Survey Company until the communist leadership learned of his Christian church participation. While some family members pulled back from Christian activities, Edgar continued. He was demoted to Financial Planner but required to maintain the Director responsibilities. This meant Edgar never received a promotion, bonus or economic incentive (reward). The communist director reaped the rewards of the diligent work of a forgiving and loving Christian. As a lay pastor Edgar was often called on to perform many more burials than the other lay staff. Many times Edgar was called on to bury communists by their distressed families. Edgar always found a way to bring comfort in the midst of grief. It brings a unique perspective to, “the first shall be last”, “and the last shall be first”. When Billy Graham visited Estonian during the USSR years, Edgar was in the middle of the event assisting as needed. Dodging the KGB and seating people wherever possible. Edgar spoke Estonian, Russian, German, English and could always locate the right word for right audience. Edgar had a good sense of humor. He loved a good laugh. We always requested he pray at the family events. He could remember vast lengths of Christmas pose as he recited the Christmas story in his native Estonian each Christmas Eve. Edgar marks the passing of a man who rose above the fray and was not defined by it. A man who proved it’s possible to raise a healthy family despite conflict. Edgar went to his glory this past Saturday. He had been ill and in failing health. We know he would have been in a worship service somewhere if he had been able. I am just proud to have been able to marry one of his daughters and call him dad. Edgar is survived by his loving wife, Heli; devoted children Merike Lokuta (Peeter) of Tallinn, Estonia; Ulle Pope (Fred) of Norman, OK; Mae Bates (Wade) of Stockbridge, GA; Peeter Tamm (Mare) of Elva, Estonia, and Triin Minton (Ben) of Anchorage, AK. He has 17 grandchildren and 6 great-grandchildren in three countries – Madis (Helen) Lokuta with Stephan and Elizabeth; Mirja-Lenna and Amos Lokuta; Timmo Lokuta; Miikael, Naatan, Markus and Martin Tamm in Estonia; Tanel (Joann) Lokuta with Mattias and Joel in England; Marten (Kellie) Roos, Michael (Kat) Roos in Nashville, Maren Roos with Mason in Stockbridge, Teele (Shaun) Hopkins, Jonathan, Helina, Linda Pope in Norman, and Ari and Mati Minton in Eagle River. Edgar is also survived by his sister Ella Tamm of Estonia. He is preceded by his parents, son Toomas, and brothers Arnold, Tonu, Rein, and sisters Ada, Meeta and Juta. Edgar was known for his gentle, loving, kind spirit, he was always happy and had a great sense of humor! He loved to be around people and enjoyed spending time with his grandchildren.

The family of Edgar Tamm created this Life Tributes page to make it easy to share your memories.

Send flowers to the Tamm family.