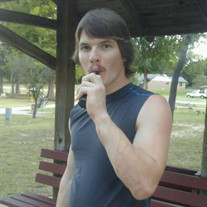 Jeffrey "Garrett" Peterson blessed our family on April 2, 1990 in Bedford, Texas. He became our Guardian Angel on September 21, 2019 in Ada, Oklahoma. He was the firstborn child and firstborn grandchild on both sides so needless to say he is well represented in the family photo albums. Garrett graduated high school in Greensboro, NC. He then studied computer science through Job Corp. He played football playing kicker, offense and defense positions in the same game. Garrett was an amazing young man. He was kind, respectful and generous. He overcame many obstacles and was making a wonderful life for himself. He was employed with Pepsi Bottling Company in Ada. He loved his job and his coworkers. He was a hard worker and an exemplary employee. He always took pictures of his recognition awards and sent them to his mother. His co-workers shared many stories of a young man with great personality and a huge appetite!! He loved his gaming systems of which he had many!!! His love was a 1989 Camaro that he worked on and had it running like a new one. He was quite the fisherman. He spent many nights at the lake or river with his fishing pole in the water. Left to cherish his memory: Mother: Christy L. Bailey, Ada, Oklahoma Father: Jeffrey Dennis Peterson, Greensboro, NC Brother: Alex Carter William Smith, Denton, Texas Sister: Siena Donna Smith, Ada, Oklahoma Sister: Jennifer Nicole Peterson, Greensboro, NC Niece: Graysen Jennifer Proposito, Greensboro, NC Grandparents: Donna and Phil Whitaker, Oklahoma City, Oklahoma Kathy Peterson, Greensboro, NC Tom Tuttle, Austin, Texas Aunt: Candice L. Robinson, Midwest City, Oklahoma Cousins: Tyler Robinson, Jonathan Robinson and Braxton Robinson (Ali & Baby Jaxon) all of Oklahoma City, OK Preceded in death by grandfather, Dennis Alfred Peterson (1943 - 2005), Greensboro, NC Memorial Service: October 12, 2019 @ 2:30 pm Visitation will follow Shawn Lawson officiating Visitation to follow The Refuge Church 1001 Tipton Terrace Ada, Oklahoma Expressions of sympathy and condolences may be sent to: 800 S Cherry, Ada, Oklahoma or to The Refuge Church. Attention: Christy Bailey. Arrangements entrusted to Signature Cremation and Funeral Services, Oklahoma City, Oklahoma

Jeffrey "Garrett" Peterson blessed our family on April 2, 1990 in Bedford, Texas. He became our Guardian Angel on September 21, 2019 in Ada, Oklahoma. He was the firstborn child and firstborn grandchild on both sides so needless to say he is... View Obituary & Service Information

The family of Garrett Peterson created this Life Tributes page to make it easy to share your memories.

Send flowers to the Peterson family.