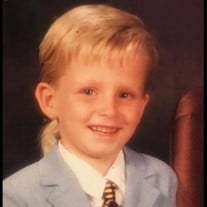 “Life isn’t about waiting for the storm to pass; it’s about learning to dance in the rain.” (Author unknown.) Everyone that knew Jake knew him as someone that lived every moment to the fullest and who would definitely dance in the rain. He was full of life and he loved people – especially his family – no matter what he was going through. Jake was always more concerned about everyone else around him. He grew up in South Oklahoma City, but made friends everywhere he went. He had such a special way to make everyone around him laugh and have a good time. Jake passed away on November 27, 2016 in Hominy, Oklahoma. He is survived by his mother, Shari and husband Keith of Yukon, OK; sisters, Tristen, Satarah and Kiara of Yukon, OK; grandparents, Ron and Barbara Loving of Newcastle, OK and Frank Wajda of Oklahoma City, OK; several aunts, uncles, and cousins, along with extended family that will all miss him very much. Jake was especially crazy about his mama. Even though he would call her so much it drove her crazy, he’d still keep calling her. No matter what, he was always a mama’s boy – that’s for sure. He was also always looking out for his sisters. Even when he wasn’t close by, he was making sure they were staying out of trouble; that’s just the kind of big brother he was. Jake and his cousin, Heather – who was more like a sister to him, born only 21 days apart – grew up together, becoming the best of friends, and often being mistaken as twins. Of course, Heather – being the oldest of the two – never did let Jake forget it.

&#8220;Life isn&#8217;t about waiting for the storm to pass; it&#8217;s about learning to dance in the rain.&#8221; (Author unknown.) Everyone that knew Jake knew him as someone that lived every moment to the fullest and who would definitely... View Obituary & Service Information

The family of Jacob Edward Wajda created this Life Tributes page to make it easy to share your memories.

“Life isn’t about waiting for the storm to pass; it’s about learning...

Send flowers to the Wajda family.