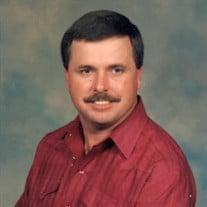 James “Kelvin” “Coach” Tritten, age 60, passed away January 15, 2018, at his home in Norman, Oklahoma, after a courageous battle with cancer. Kelvin was born May 16, 1957, in Oklahoma City to Ronald Carl and Bobbie (Greenhaw) Tritten. Kelvin grew up in Crowley, Texas, and attended the Crowley First Baptist Church. He participated in football, baseball, basketball and track for the Crowley Eagles and won many awards. Kelvin graduated from Harden Simons University in Abilene, Texas, and began his teaching and coaching career in the Western Heights School District in 1980, where he also served as the head high school football coach for several years. He dedicated his life to the Wester Heights students and retired from this school district after twenty-seven years of exemplary service. Kelvin met the love of his life and “bride” while on one of his many mission trips, and married Susan “Sue” Mangano on July 30, 2005. Kelvin and Sue established a very successful Jack Russell Kennel business in Norman after his retirement. Kelvin’s main goal, however, was to exemplify Christ in all he did. Kelvin preceded in death by his grandparents Buford “Boots” and Josephine Greenhaw and Carl Tritten and Emily Martin. Survivors include his wife Sue of the home, and step-children Tony Mangano of Norman, and Katie Karapostles of Lake Stevens, Washington. He is also survived by his parents Ron and Bobbie Tritten of Norman, OK, brother Ronnie, Jr., and wife Vanessa Tritten of Burleson, Texas, and sister Kathy Childers and husband Jerry of Seminole, OK, and sister Karen Quartuccio and Husband Chuck of Norman. He is also survived by eight nephews and their wives, and one niece, Arielle, and five granddaughters. Viewing will be Friday, January 26 from 6-8 pm at Ford Funeral Services at 305 S. Sooner Road in Del City. The Funeral will be at 2 pm Saturday, January 27 at the Hilltop Baptist Church located at 11710 East Stella Road in Norman. Graveside Service will be at 3:30 pm at Blackburn Cemetery. In lieu of flowers, the family requests that donations be made to Northwestern Baptist Association, Psalms 91 Orphanage, 2801 Maple Ave, Woodard, OK 73801, 580-256-2678, in Kelvins name. Services are entrusted to Signature Cremation & Funeral Care.

The family of Kelvin Tritten created this Life Tributes page to make it easy to share your memories.

Send flowers to the Tritten family.