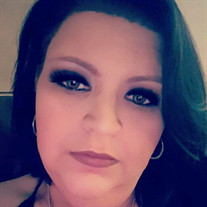 Monica Diane (Beloney) Cuttrell was born on March 1, 1982 in Marshall, TX to Joe E. Beloney and Celia (Kindley) Morgan. She passed away on Wednesday January 17, 2018 in Oklahoma City, OK surrounded by her family. Monica married Brent Lee Cuttrell on November 11, 2011 and to this union, their daughter Michaela Lee Kindley became Michaela L. Kindley-Cuttrell, and so the Cuttrell family began. Monica was a homemaker, she enjoyed spending time with her family and friends. he attended Kicking Horse Job Corps Center in Ronan Montana from 1999-2002, where she studied Business and Clerical. She is preceded in death by her father, Joe Beloney, grandparents, J.C. and Jewell Kindley, and James and Vernell Beloney. Monica is survived by her husband, Brent, daughter Michaela, mother, Celia Kindley, sister, Amanda G. Smith and her son, James Cayden Legier, brother, Edward Beloney as well as many aunts, uncles and cousins. Come-and-go visitation for Monica will be held on Sunday, January 21, 2018 at Crawford Family Funeral Service, 610 NW 178th St. Edmond, OK 73012 from 12-6 p.m. with a service being held at 3 p.m.

The family of Monica D. Beloney-Cuttrell created this Life Tributes page to make it easy to share your memories.

Send flowers to the Beloney-Cuttrell family.