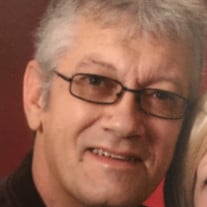 On Monday, September 14th, 2020 Scott Leo Clement, age 62, passed away from multiple myeloma. Scott was born December 7th, 1957 in Waterloo, IA to Delbert and Shirley Clement. He was the oldest of four boys. Scott married Brenda Steinkraus on June 7th, 1980. They have two daughters, Tara and Tasha. Scott worked for the City of Waterloo Street Department for 31 years before retiring in 2012. He enjoyed his job and loved his "Guys", some of which became lifelong friends. Scott was a man of faith and enjoyed helping others, along with fishing, working on cars, and watching TV. He enjoyed spending time with his family most of all his grandkids. They were one of his greatest loves in life. Scott was a kind, patient, loving man with an amazing sense of humor. For the last decade he relied on his faith, family, and friends to get through "one day at a time". He was the strongest man many will ever know. May his soul finally rest in God's loving hands. Scott was preceded in death by his parents. He is survived by his wife of 40 years, Brenda, daughters - Tara (Terry), Tasha (Shane), and grandkids - Ariana, Gage, Hunter, and all of his grand-furkids. Brothers - Dana (Sharron), Mark (Kelly), and Pat (Tonya). Also nieces, nephews, and a host of other family and friends. A memorial service to remember and celebrate Scott’s life will be held on a later date, yet to be determined. Please check back for updated service information, once made available. In lieu of flowers, the family of Scott asks that you please consider a memorial donation. Donations may be sent to Signature Cremation Care (447 SW 89th St. Oklahoma City, OK 73139).

The family of Scott Clement created this Life Tributes page to make it easy to share your memories.